The Hudson Hike along the Hudson River at Palisades Park is a venerated annual fall tradition for Lower School students at MSS. In the years since its inception, this excursion follows the same blueprint. Young alums fondly remember spotting eagles, trying to push Big Booty (the rock) into the water, tackling the scramble method of traversing steep hills, writing in observation journals, and collecting sea glass on the beach, just as current students experience it today.

One of the Hudson Hike’s preparatory activities for the preschool classes is to generate a checklist of what they expect to see on their preview walk down to the river. The account usually includes boats, waves, bridges, and sticks, but sometimes also a Tyrannosaurus Rex, pirates, crocodiles, and hippos. “It is always a joy to witness the students move from their divergent brain to real life observation. The dinosaur that appeared so plausible in the child’s imagination seems funny upon further scientific investigation at an actual river.”—Emily Ford Sytsma, Program Director, Preschool-Grade 1 & Extended Day I have heard Emily share this story on more than one occasion, and I am invariably struck by the knowledge and respect that MSS teachers and program administrators exhibit for this period in a person’s life. At Mustard Seed, Preschool, Lower School, and Middle School are not regarded as preliminary and incidental footsteps to be rushed in favor of more important milestones down the road. In keeping with the Reggio approach, these early years are as fundamental as university training. Nor are our students expected to perform as cloyingly precocious Hollywood versions of children. Their innate curiosity and stages of development are noted and honored. I recently viewed Celine Sciamma’s enchanting 2021 film Petit Maman in the theater. (I highly recommend seeing it if you have the chance!) Presented from an eight-year-old girl’s point of view, the story follows her brief stay at her mother’s childhood home after the death of a beloved grandmother. In addition to the passing of life, this quiet motion picture tackles complex topics like regret, juvenile illness, and undulating familial relationships.

The movie exhibits an understanding and celebration of childhood that mirrors what I witness every day at Mustard Seed. When the protagonist realizes her new playmate in the woods behind her grandmother’s house is actually her mother as a young girl, she never questions it. No explanation is offered to the audience. Acceptance of the fantastical is a magic of childhood. Anything, like pirate ships rolling down the Hudson, is possible!

Time runs slowly in the movie while the girls build a stick fort, make a mess giggling and preparing pancakes in the kitchen, write and act in plays together, and row a boat on a lake. The girls speak and act in an authentic manner. The work that they do and the decisions they make, which perhaps would be considered negligible in another movie, are treated with respect and care in this one. I observed a similar care in Cindy Kuperus’ third grade classroom. Toward the end of the school year, a parent had generously donated a gift card allowing Ms. Kuperus to treat the whole class to a walking trip to Ben and Jerry’s for ice cream in Hoboken. Prior to the excursion, Ms. Kuperus held a meeting with her 20 students in the classroom to facilitate an easy process at the shop. She explained the menu options: In addition to vanilla, chocolate, and strawberry ice cream, they could order Ben and Jerry’s custom Berry Berry or Lemonade Sorbet. They could have their treat served in a cup or a cone. If they picked a cone, the cone would actually be placed upside down on the cup. Ms. Kuperus dutifully recorded their choices and when all of the orders were documented, she asked students to stand at the mention of each selection to double check her order. So, for example, three students stood when she said, “Chocolate in a cup.” She took their ice cream decision seriously, and so did they. Similarly, every student in this class that I interviewed for the Global Expo had intentional reasons for their choice of the country to study. In addition to history and current affairs, students sculpt a 3-D map, report on a famous work of art or architecture, and build a cultural artifact for the Expo, a precursor to the Exhibitions they will complete in seventh and eighth grade. They give a brief informative speech about their chosen country to students and parents.

I suspect that the decision process for their choice of country is at least as deliberate as the meeting for the ice cream treat I had witnessed. One student said her father’s family had immigrated from her chosen country. Vacation travel to a foreign country sparked another decision. Not one student shrugged their shoulders with insouciance and a vague rationale for their choice. Driven by their personal interests and narrative, they placed value on their unique voice in weighing their country decision. By third grade, MSS students were already adept at constructing their own learning. For his History Exhibition, rising eighth grade student Nestor Perez-Rivera, elected to examine the Ecuadorian–Peruvian War. His mother remembers living in Ecuador during the Alto Cenepa War in 1995. Learning more about the continual conflict over natural resources and land between the two countries helped him better understand the lingering acrimony he had long sensed among individuals. Like the third grade students, Nestor’s choice of topic for further study was considered thoughtfully, and was meaningful for him personally.

“Students who have agency, who feel that they have some control over their lives, are much more engaged in their own learning,” says Ms. Kuperus. “Mustard Seed students are presented with many opportunities to follow their natural curiosity and interests.” A student’s sense of personal agency begins early at Mustard Seed. Case in point: Kristen Jordan believes in the importance of daily outdoor play for her class of three year olds, even in exceptional weather. However, after bundling up and walking for half a block in cold, drizzling rain one day, Ms. Jordan determined that a major downpour was imminent. The students were capturing raindrops as big as snowflakes on their tongues.

She explained to her students that they were taking a new path and returning to the classroom quickly through a door that they had never seen. When approaching the entrance, one of the students asked, “Are you sure about this?” This response ignited a chorus of “Are you sure about this?” as the students entered the door. At age three, these Mustard Seed students already felt empowered to think, to communicate, and to question. 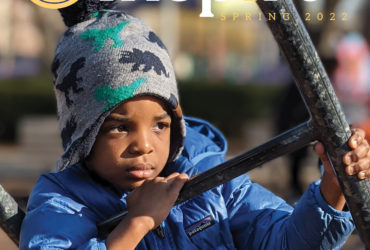 Read about emergent curriculum and the use of personalized teddy bears in the preschool, catch up on news with alums, and more! How to Talk to Your Children About Ukraine