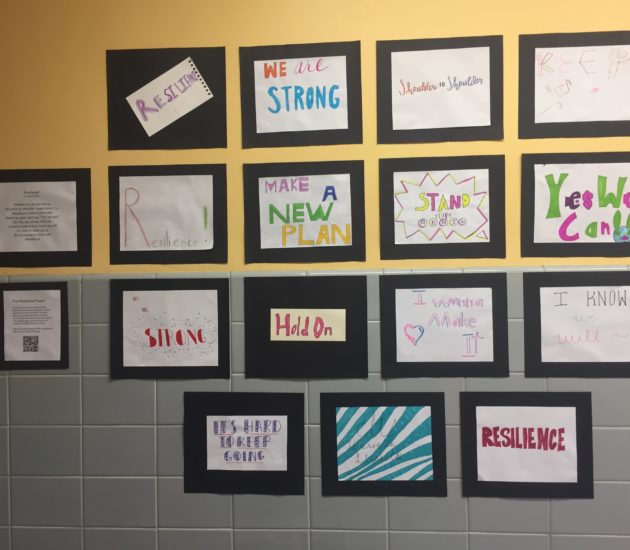 In the first seven weeks of the school year during Covidtide (I’ve adopted a new word from a friend), students in grades 6-8 have been working hard. Sixth grade students have become beloved members of chorus and are rehearsing at school (without singing!) and virtually. Seventh and eighth grade chorus members have been rehearsing virtually on Zoom.

On Oct. 26, Chorus led prayer & praise worship on “Resilience.” In this worship, chorus released a video of Abbie Betinis’s song “Resilience” from The Justice Choir Songbook.  To make the soundtrack, students recorded themselves in Soundtrap, a digital audio workstation (DAW). They then created signs with words from the song and took pictures of themselves holding their sign. The signs have been hung in the hall on the third and fourth floors to encourage the school. Finally, we shared the song with composer Abbie Betinis who was so thrilled that she has asked to share our video through the Justice Choir social media!! You can watch the video below.

And… there’s more! Students in sixth grade general music have been learning to use Soundtrap. They have been working on a rhyme project where they record themselves saying a nursery rhyme and then add voice transformations and sound effects. Next, they’ll add music.

In seventh and eighth grade, students have been working on their music exhibitions. On Wednesday, November 11, they’ll present digital audiobooks complete with sound effects and music. Parents will receive the schedules via email so that they may attend their child’s exhibition. With more than 20 years experience teaching music in a variety of settings from elementary to college, Dr. Jessica Smith has a deep love for music education, integrated arts curriculum, world music, and worship.
In 2017, Smith traveled to Ghana to study West African drumming and dance as part of a fellowship from Fund for Teachers. In 2015, she completed four years of training to become a Guild Certified Feldenkrais™ Practitioner, a method that uses neuroscience and movement as a catalyst for potent learning. As a clinician, Smith has led workshops in vocal studies and drum circle facilitation. Before coming to Mustard Seed School in 2008, Smith was the Director of Preparatory & Continuing Studies at the University of Houston’s Moores School of Music where she also served as a Visiting Professor.

Dr. Smith enjoys traveling and spending too much money on plants at the Union Square Greenmarket. The Music Exhibition: A Storied Composition Ascension & Pentecost: Celebrating Jesus’ Ministry And How We Are Part Of God’s Story