“We’re going on a bear hunt.

We’re gonna catch a big one!

What a beautiful day.

Welcome back to Drama!

In Drama, books have brought us tales of tigers and treasure … and now bears. The kids have been loving reading and rereading this book. So you can imagine their delight when Mr. Johnson announced that …

The Rivers Class would go on their own bear hunt!

They went on expeditious hunts all week and they found bears all over the place! Many in similar places to where the treasure was hidden;  in windows, under benches, around corners, and even … And Mr. Johnson and Ms. Buckley said that they could KEEP THEM.

The children were ecstatic.

They carried them back to the Rivers Class

And hugged them tight. After counting themselves, the children agreed that there were enough bears for them to each pick one!

They each picked carefully… And so we gave them each a block with the child’s name on it.

This satisfied them for a bit — but three things quickly became apparent:

1. It was still too easy to mix the bears up! They all looked the same

2. The bears needed their own names and …

3. If these bears were going to be at school with us, the children concluded, they need to be safe just like us. They needed masks…

And so out came the fabric and the ribbons and the socks… and outfits started to emerge. Then shirts (made of socks!)

Then other accessories, like ribbons, hats, and pop pom buttons.Each child selected all their own materials and worked with the teacher to realize their design… As the children have been dressing their bears, they also have been getting to know them.

Their likes, dislikes, favorite things … even asking them their names!

I wonder what their names will be?

And I wonder what else we will learn about them?

There is still the issue of these blocks…

As great as the bears’ look (you’ll get a more in-depth look at them in the next blog) their “block beds” (as the children have come to call them) are not very comfortable.

Will you send in a shoebox to help make a lovely, comfy bed?

They don’t have to be beautiful — the Rivers Class kids will take care of that themselves! So much happens in Drama!

When a tiger came to tea in drama, he helped the children learn about playing together, sharing, and polite conversation.

I wonder what these bears will teach us?

Tune in next time for more in Bear News… 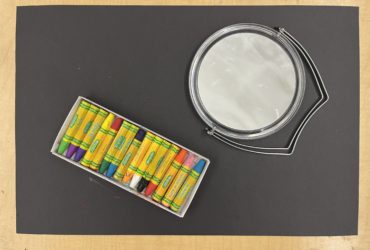